New drugs for the treatment of COVID-19

Two recent studies carried out with antiviral drugs demonstrate their effectiveness against Coronavirus.

Two major studies on the efficacy of new antiviral drugs for the treatment of COVID-19 have been published in the New England Journal of Medicine. Both studies have included coronavirus-infected patients with risk factors for developing severe disease (age over 60 years, obesity, cardiovascular disease, etc.).

Molnupiravir as a treatment

In one of the studies, a drug named Molnupiravir, with antiviral activity against the coronavirus, was used. A total of 1,433 patients were included, of whom 716 were treated with Molnupiravir (800 mg orally, twice daily) and the other 717 received placebo. Treatment was administered in the initial phase of the disease, in the first 5 days after the onset of symptoms. The risk of hospitalization or death was found to be significantly lower in the Molnupiravir group (7.3%) than in the placebo group (14%).

One death occurred among the patients treated with the drug compared to 9 in the placebo group, the risk of death being estimated to be 89% lower in those treated with Molnupiravir. Adverse effects were similar between the two groups (diarrhea, nausea, and feeling sick).

The use of Remdesivir intravenously

In the other work, Remdesivir (another antiviral drug against coronavirus) was studied and administered intravenously to 279 patients with COVID-19, giving them 200 mg on the first day and 100 mg on the second and third days, comparing the results with a group of 283 patients who received placebo. The patients included had to have at least one symptom of infection within  the seven days prior to the start of treatment, since it has been shown that hospitalization typically occurs at 7 days of evolution or later.

At 28 days of evolution, only 0.7% of the patients treated with Remdesivir were hospitalized compared to 5.3% of the control group. Furthermore, the risk of death was 87% lower in the treated group than in the placebo group. Side effects of Remdesivir were nausea, headache, and diarrhea.

What is the effectiveness of drug treatment?

In summary, both Molnupiravir and Remdesivir have been shown to be effective as an early treatment for COVID-19 by reducing the risk of hospitalization and death. The two drugs are effective against the Alpha, Beta, Delta and Gamma variants of the coronavirus. When these studies were carried out, the Omicron variant had not appeared but it is believed that they will also be useful because the Omicron variant does not present mutations in the region against which both drugs act.

Ecography of the superior abdomen (II) 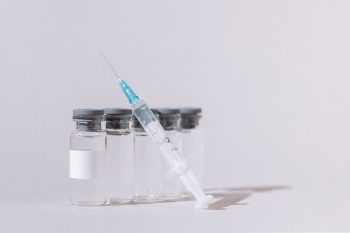 Duration of the vaccine against the COVID-19